This  expedition report is not really about scuba diving. There is, of course, plenty to say about the diving in Myanmar. The 3 days we spent at Black Rock and the 52 Giant Manta Rays we identified was the best diving experience of my life. The ‘Queens of Mantas’ herself had this to say about one particular dive:

The problem with the 2017 Ray of Hope expedition, is that it was so full of underwater surprises, that it is too easy to forget everything else that happened. Therefore, I am going to leave the Manta Ray diving blogs to the scientists that were on board. This photo blog will focus on what lies above the surface. For example, in the name of geology, I climbed to the top of Black Rock! So take at look at the people, the boat and the magnificent country we were lucky enough to explore.

The Ray of Hope Superstars

The Queen of Mantas, Dr. Andrea Marshall, is renowned as the World’s leading Manta Ray expert. Her research lead to the the separation of two different Manta species. She was the first to make the distinction between the Reef Manta (manta alfredi) and the Giant Manta (manta birostris). Whats more, she has recently discovered a third species of Manta Ray in Mexico.

Dr Andrea Marshall never stops. If she was not diving with Manta Rays, then she was talking to every guest on board and answering all the questions that we had for her. Quite literally, if she doesn’t know the answer to a Manta Ray question, then nobody does. Her presence is what makes the ‘Ray of Hope’ trips so special. 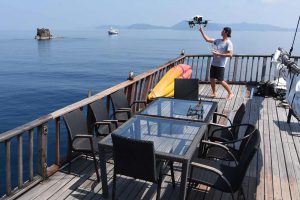 Janneman Conraide, Andrea’s husband, makes awesome movies. His Canon 5D Mk. III has no strobes. All the underwater footage is done with white balance alone. And after years of diving with the Marine Megafauna Foundation, he knows just how to interact with Manta Rays. His Manta footage is exceptional.

Combine this with his excellent control of a drone and you have the ingredients for a great movie. We have featured this video elsewhere on Scuba Diversion, but if you have not already seen it, here are the highlights of the 2017 Myanmar ‘Ray of Hope’ expedition as filmed by Janneman Conradie. 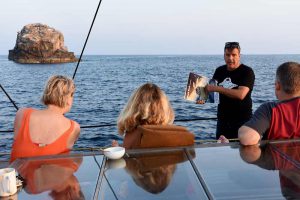 Ric Parker is a diving veteran in the Andaman Sea. If you look online for maps of the dive sites in the Similan islands or the Mergui Archipelago, there is a good chance they were drawn by Ric.

If Andrea was the host, then Ric was the organiser. He arranged all the scheduling, did all the dive site briefings and answered all the questions about Myanmar. Ric has been a key player in the Myanmar Manta Ray research expeditions since 2011.

If you would like to join any future ‘Ray of Hope’ or ‘Off the Chart‘ trips then you are almost guaranteed to meet Ric Parker.

If you are cruising around the remote paradise islands of Myanmar, there is no more romantic way to do it than on a vintage sailing yacht. The classic style of the SY Diva Andaman makes the experience so much more special. Naturally, the boat you decide to dive from, becomes a part of the scene that you are in. There is no diving liveaboard in the Andaman Sea more beautiful, and more suited to this setting, than the SY Diva Andaman. 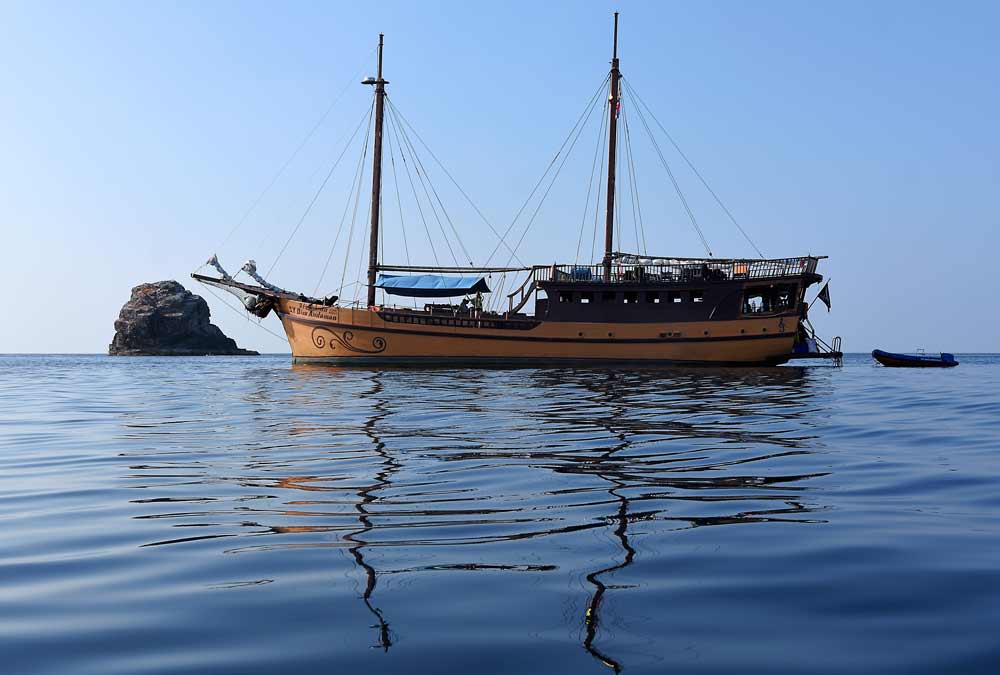 The attention to detail on this liveaboard transports you to back to another era. This is the closest I will ever get to pretending I am Jacques Cousteau. 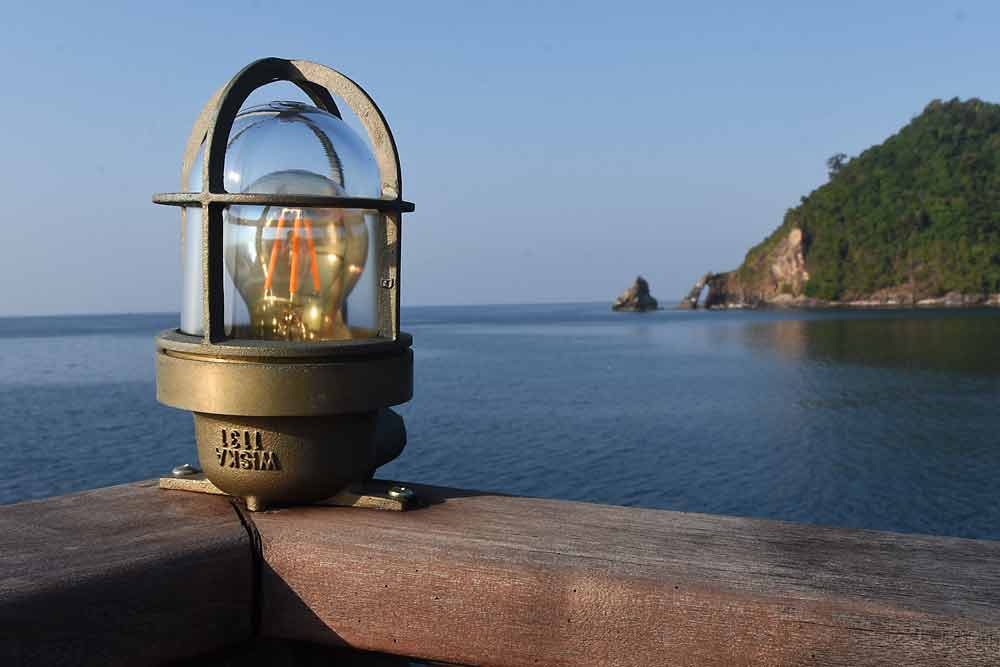 The hardwood requires constant maintenance, but the dedicated owner Yannick is always present and working. This boat was his dream. He has the passion to live at sea and simply take care of his boat. His dedication is apparent and admirable. 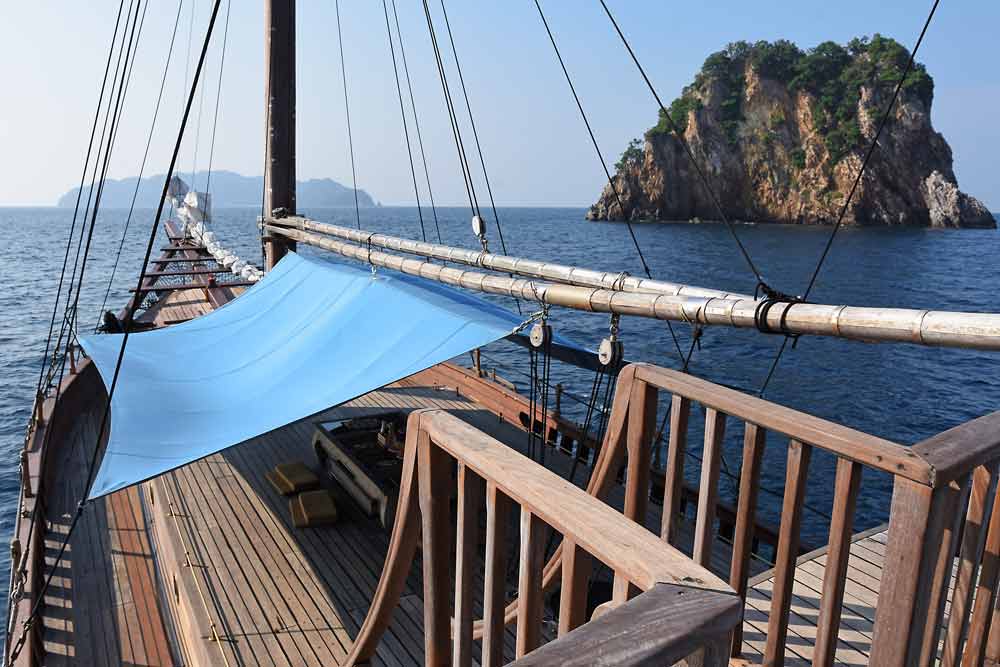 The sense of adventure was palpable from the start. After spending most of my career working in much more developed areas, it was genuinely exciting to look on the horizon and see no other boats. 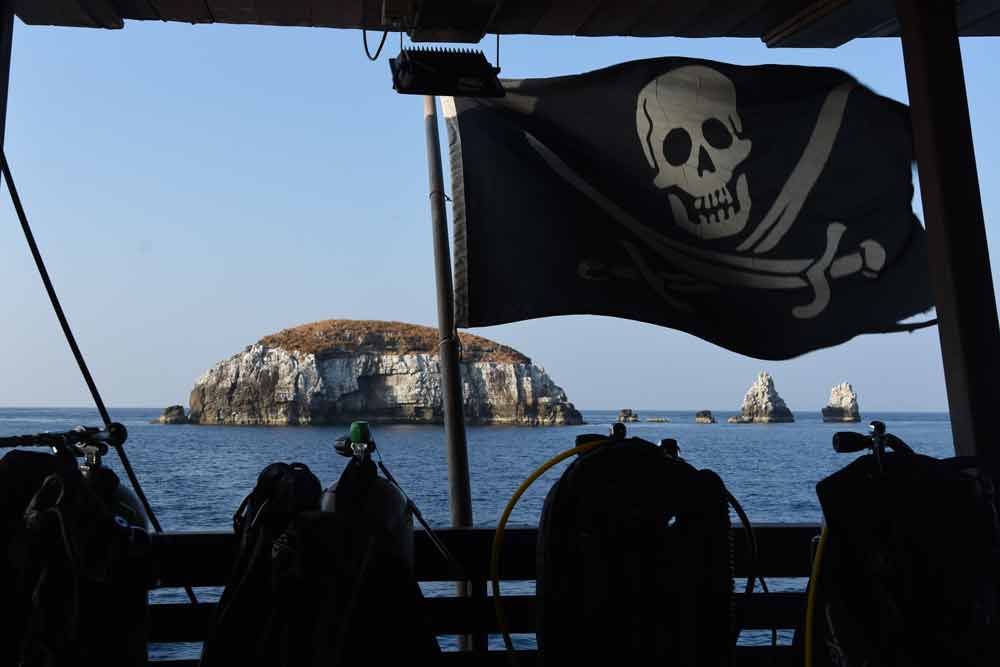 The majority of dive sites towered out of the water. Limestone islands were visible on the horizon miles before you reached them. 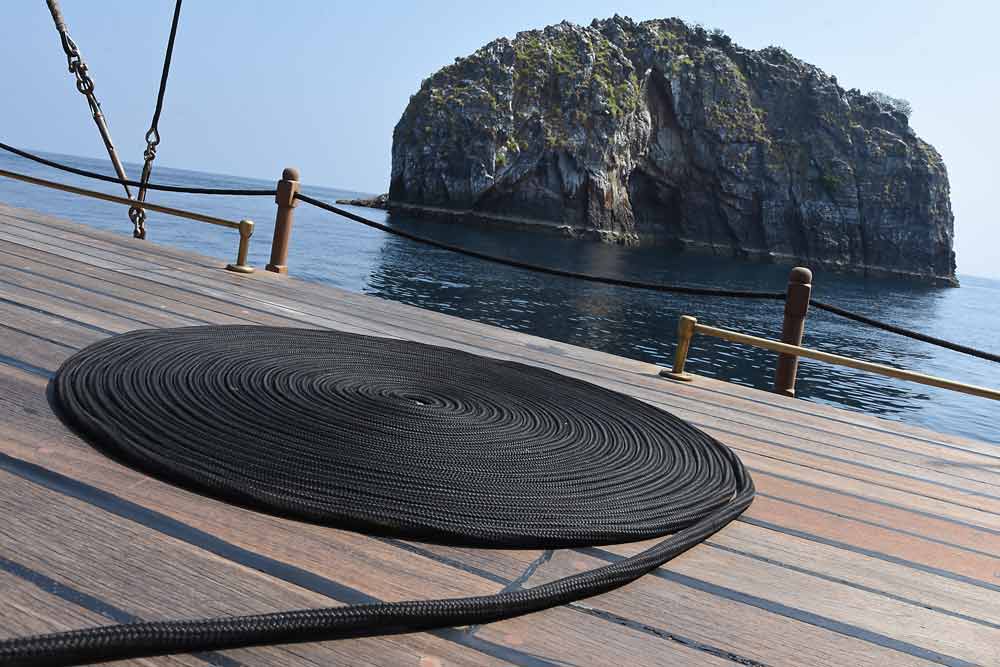 Diving was done from the dinghy, so the Diva Andaman always moors up close to the islands. This meant that if you were not gently cruising up and down the Mergui archipelago, then you were relaxing with a unique and beautiful island as a backdrop. 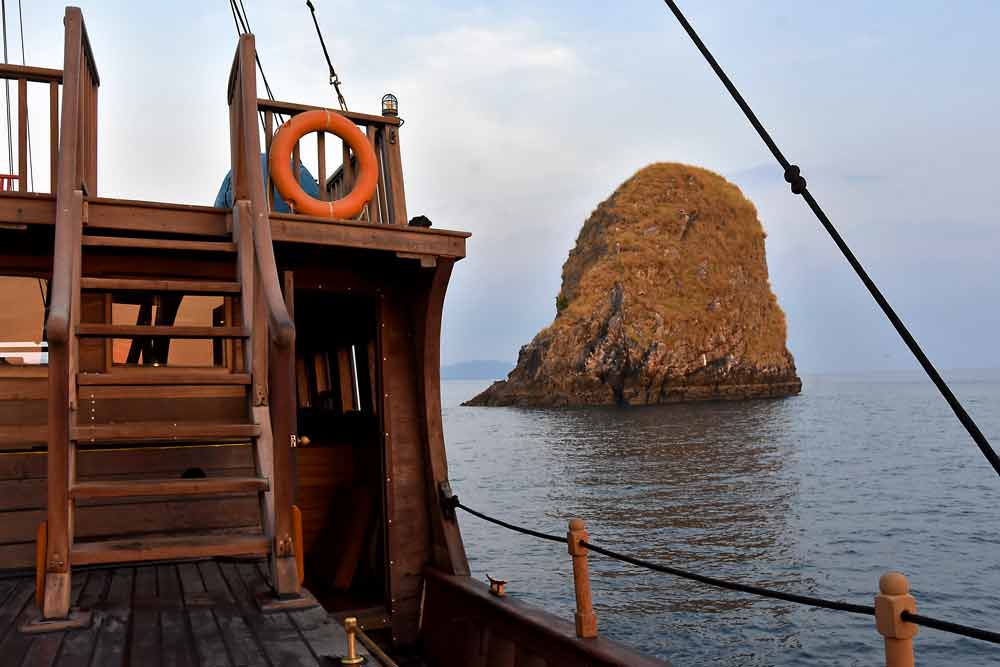 The food was sensational. Breakfast and lunch were wonderful buffets. The mid afternoon snack was always a classic Thai dish like the famous Mango and Sticky rice. Then the meal to look forward to was dinner. Every evening the sundeck was transformed. Dining tables were laid out and a full three-course meal with table service ensued. Whether you were vegetarian, or enjoyed a medium-rare fillet steak, you were catered for. 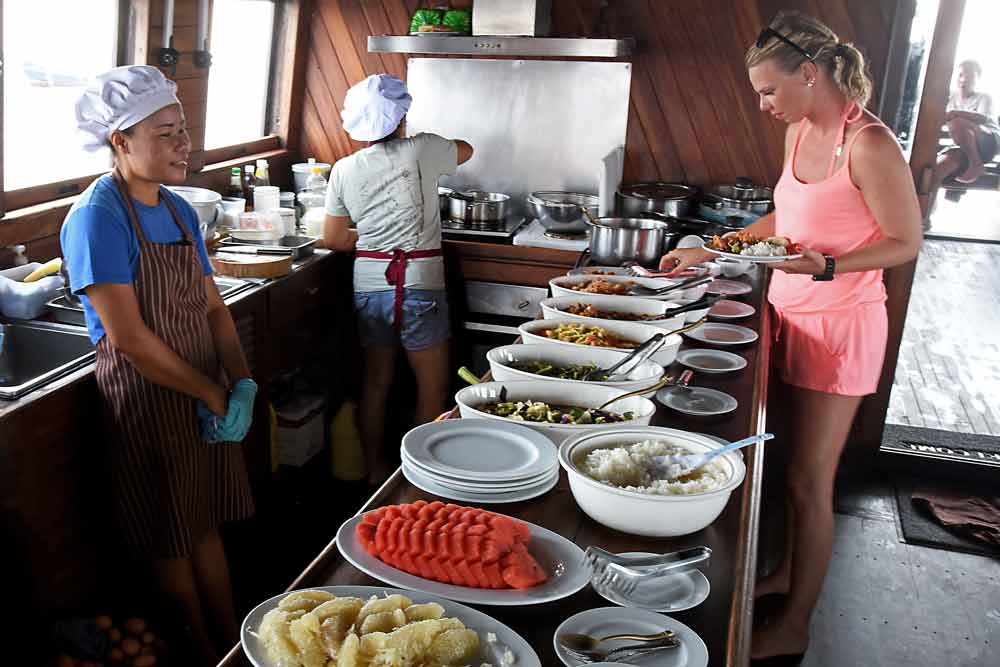 Everything about being on the Diva Andaman was just better. It will be hard going back to steel after this trip of a lifetime. Well, I suppose there is always next year… 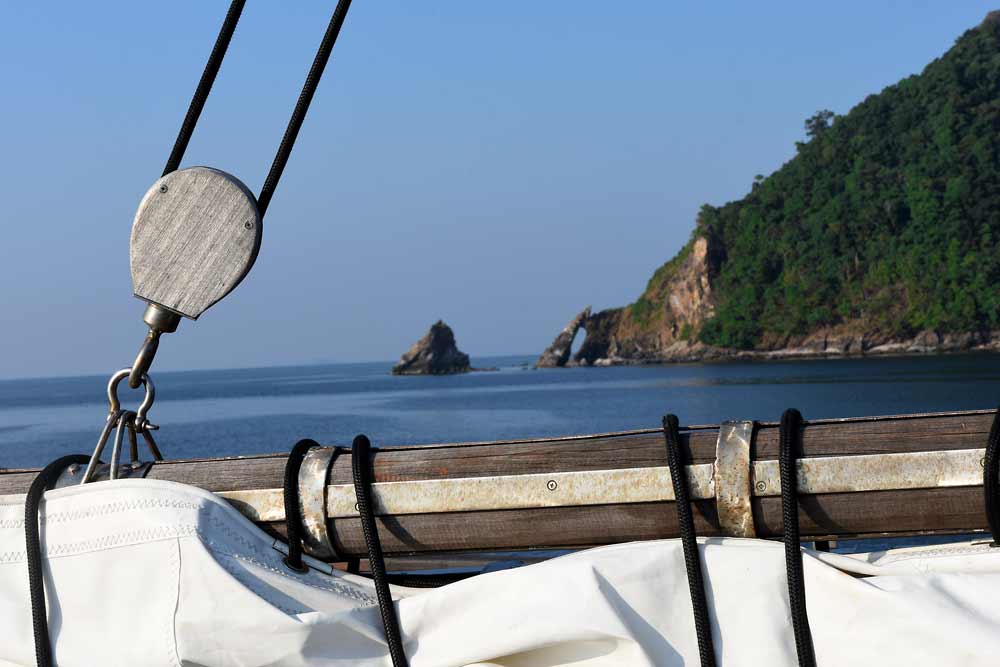 And then there was Myanmar… 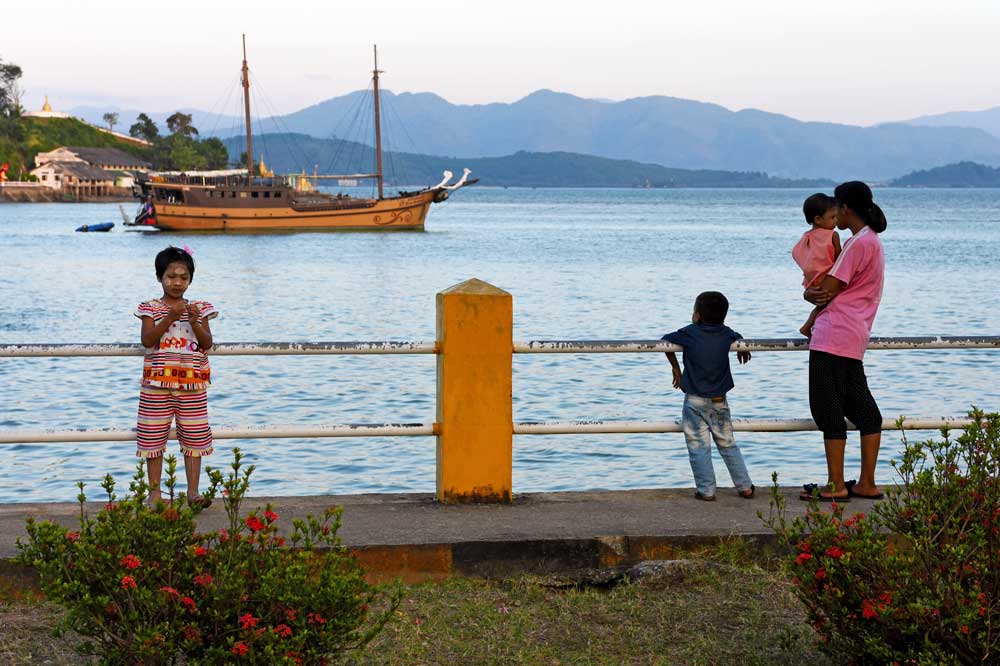 The difference between Myanmar and Thailand, is a difference of about 50 years. Thailand is still a fantastic country to visit, but you cannot deny that it has changed dramatically in the last few decades. All the while, Myanmar stayed the same. 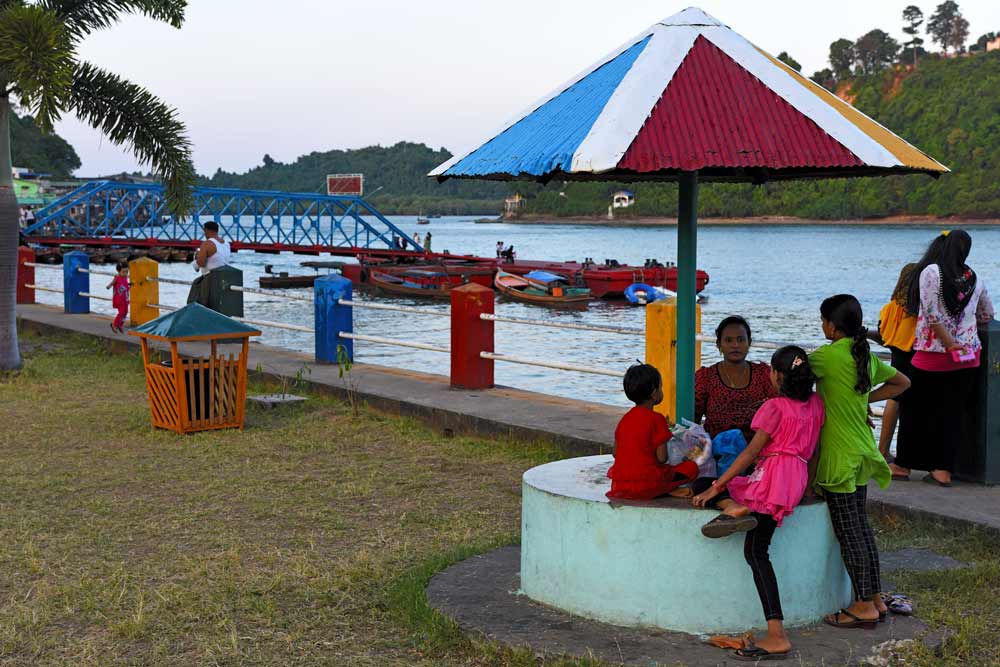 From 1962 to 2011 Myanmar was under the rule of an oppressive military junta. During this time tourism there was essentially non-existent. If you would like to see a country untouched by the rest of the World, you will need to see it soon. 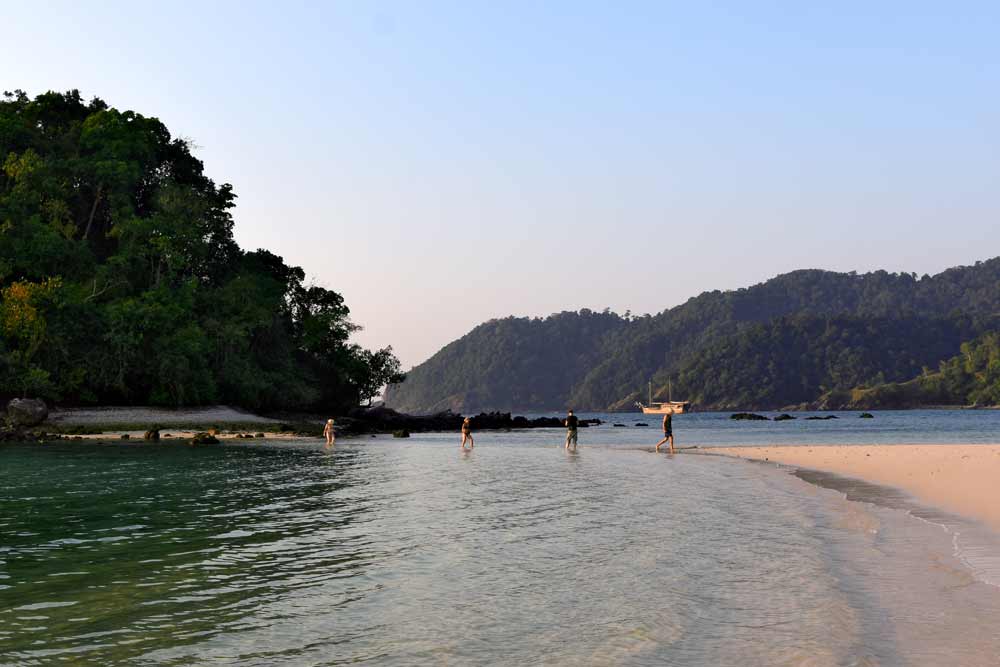 There are any number of deserted beaches to visit in the Mergui Archipelago. As most of the dive sites were so remote, we only had time to visit one beach. But as anyone who came with us will remember, it was magical. We walked across the small sandbar, just beneath the surface, to a tiny little island in the middle of a large bay. As the tide had risen over the sandbar, small air pockets formed under the sand. So as we walked over the sandbar, each step we took released the air pockets. I have to admit I was literally laughing with joy as we received our very first (naturally occurring) foot Jacuzzi. 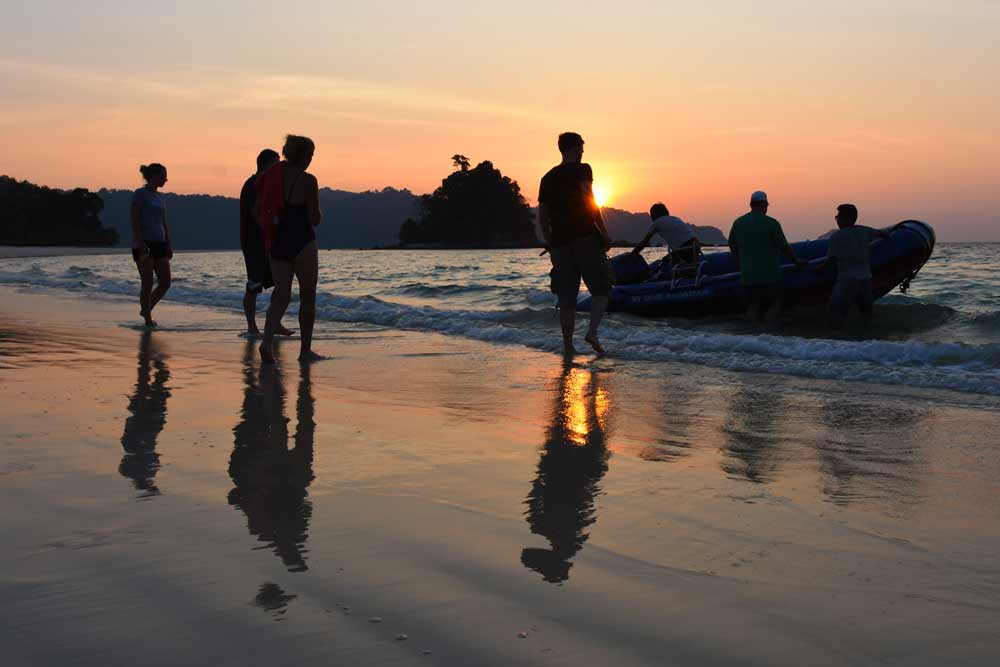 I promised I wasn’t going to talk about diving, so I won’t. However, I still need to talk about Black Rock. And in case you missed it the first time, just to give you an idea of its size, this is me standing on top of it.

This wasn’t just for fun; this was for science. One of the guests, Vaughn Chamberlain, worked as geologist (you can just about see him on the right). He showed us how the rocks were formed and how old they were. Another article on the Geology of Black Rock should be following shortly. 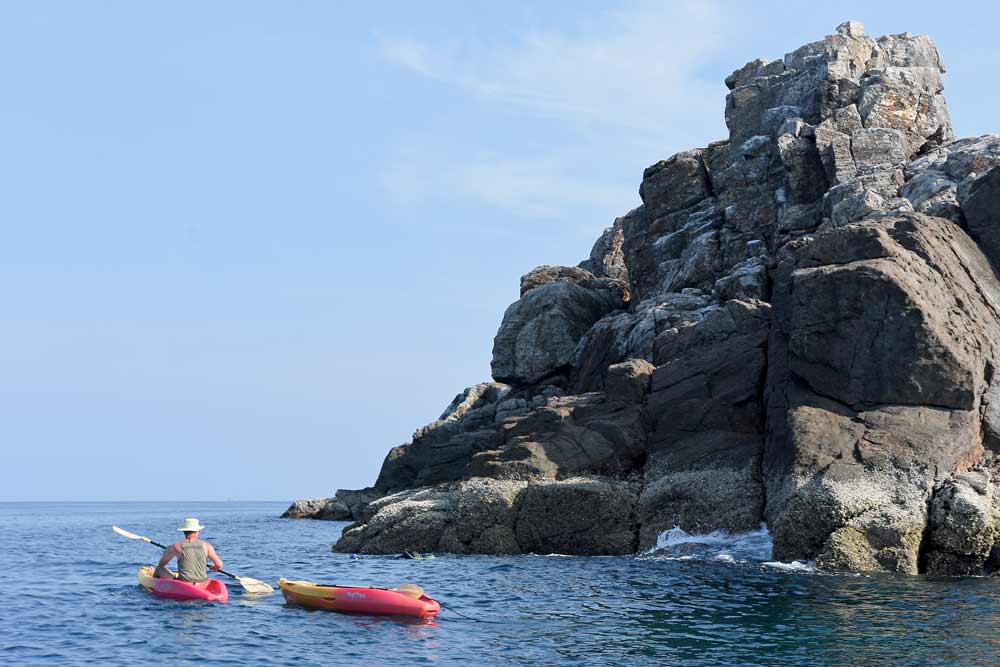 If the experience of an interactive geology lesson in the middle of the ocean wasn’t special enough, the Manta Rays were on hand to help. From the top of the rock we were able to see several Mantas swimming close to the surface. I have never had an aerial view of Manta Rays before; it was wonderful. 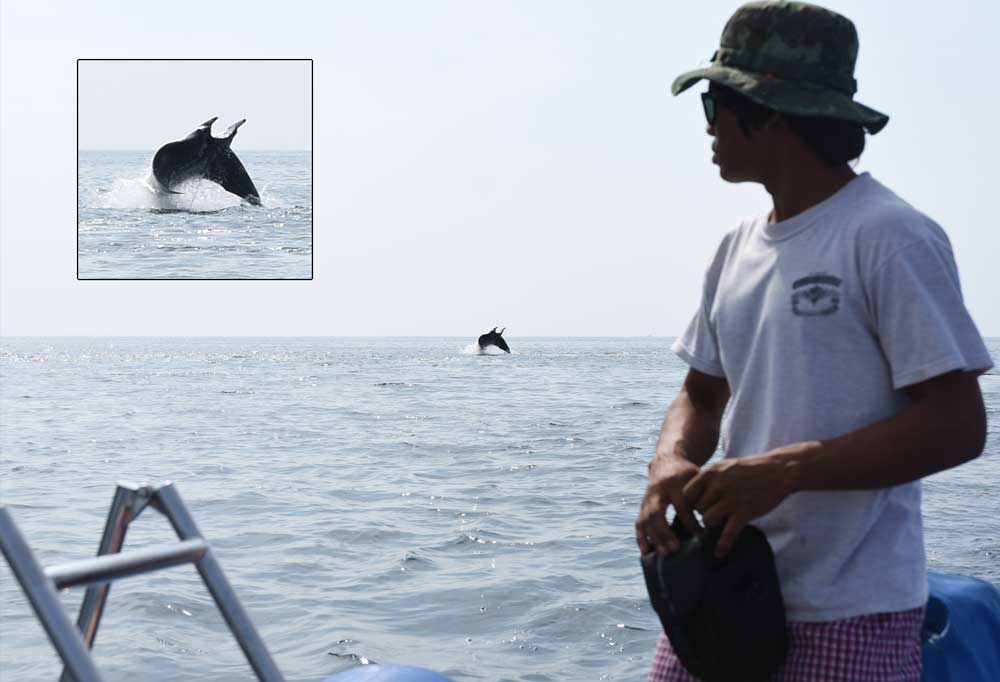 Ric was waiting for us in the dinghy, along with boat boy ‘Mad’ and Vaughn’s son Stewart. Whilst they were waiting, Manta’s were breaching all around them. Ric even managed to capture one breaching on (a wide angle) camera. Black Rock was so full of life it is hard to describe. 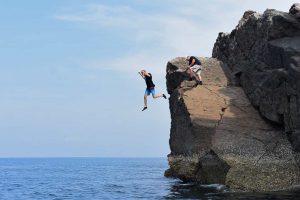 Apologies for the image quality of the following Manta photo, but without a photo you wouldn’t believe me. After we jumped back into the ocean, and got back on the dinghy, the geology lesson continued.

‘Mad’ slowly maneuvered the dinghy along the sheer wall on the West side of Black Rock. As the engine slowly ticked over, Vaughn pointed out the various veins in the rock, and proceeded to describe the rock’s formation. 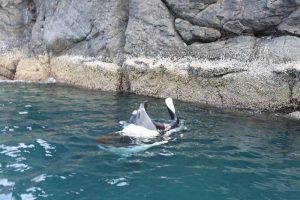 As he was talking, A Giant Manta Ray surfaced just a few meters from us. It didn’t breach, it just slowly and calmly poked its head out of the water, as if to say ‘Hi’. Even Dr. Andrea Marshall said she had never witnessed this behaviour before.

So, as promised, I still have not mentioned any of the experiences I had whilst diving. All I will say is this; if the Mantas were so incredibly curious and playful at the surface, just imagine what it was like  to spend time with them below.

Spaces on the MMF’s ‘Ray of hope’ and Scuba Diversion’s ‘Off the Chart’ expeditions are extremely limited. This year we did just two trips. We use all our data from previous years diving to visit at the best possible time of the season. Experiences like this can never be guaranteed, but we can do everything in our power to give you the best chance possible. 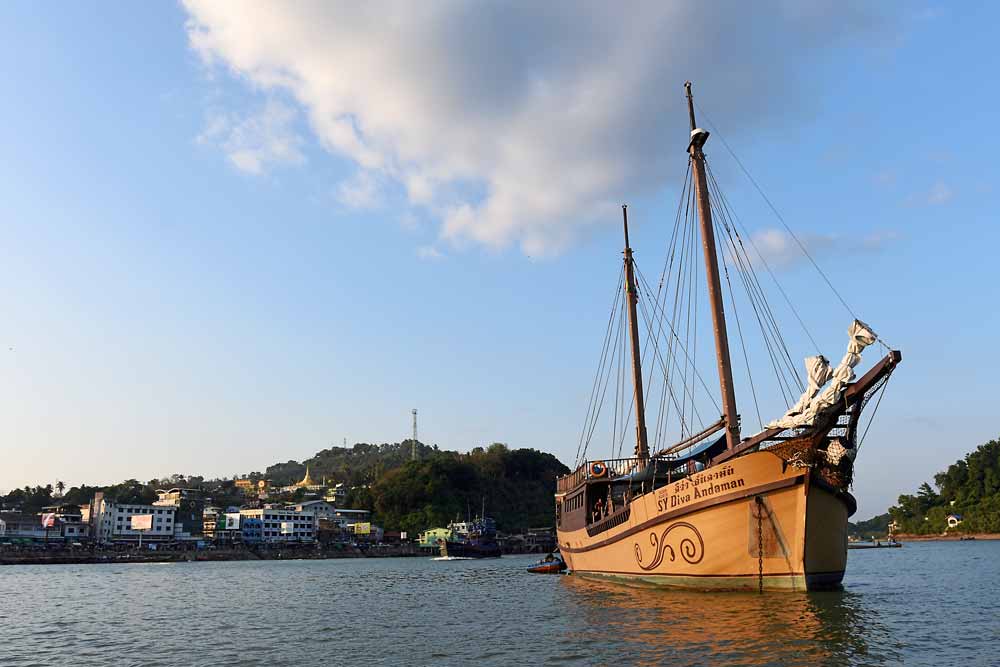 If you would like to join us on a truly exclusive Myanmar liveaboard trip in the future, then sign up for our mailing list or send us an email. Receive priority booking and get updates as soon as the trips become available. 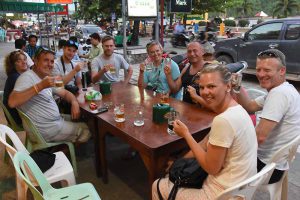 And finally, Cheers! To everyone who joined us on the 2017 Myanmar ‘Ray of Hope’ expedition, I hope to see you again.

It was the best diving experience of my life a privilege to join you all.

Oh, and by the way, fancy joining us for more of the same in Raja Ampat?

See you in December!

Off the Chart Expedition to Raja Ampat 2017