Black Rock is Myanmar diving, if not the entire Andaman Sea, at its absolute best. This lonely, dark, foreboding rock sits alone surrounded by deep, open ocean. It acts as a magnet for fish life large and small, predator and prey, with regular chances to encounter ocean giants. Dr Andrea Marshall rates Black Rock as one of the world’s top ten giant manta ray dive sites.

Black Rock lies 114km West of the Myanmar coastline and approximately 13 hours from Kawthaung. Above the surface the dark, jagged limestone rock is almost 20m long, 4m wide and 2m high. Underwater the long western side of Black Rock is a sheer wall, dropping to around 22m before rocky ledges tumble down beyond 50m. The eastern side is more of a gradual slope down to 30m and the sandy ocean floor. Most of the rock on this side is covered in colourful soft corals, blanketed by anemones and dotted with huge gorgonian fan corals. The western wall, though not as colourful, has plenty of cracks and crevices that, like the entire dive site simply teem with life.

Black Rock is often the highlight of any Myanmar liveaboard trip. It’s remote location means you are likely to spend an entire day there giving you ample opportunity to explore the dive site. Early morning dives can be exciting with chance encounters of larger predators. Day time dives are full of life and colour. Sunset dives are a frenzy of feeding action.

Black Rock’s limestone composition means there are a multitude of small cracks, overhangs and small caves that are teeming with macro life. Armies of shrimp hide in the shadows, numerous species of moray eels lurk in cracks and for those with a keen eye there are plenty of sea horses, harlequin shrimp, frog fish and other rare species of camouflaged fish.

Black Rock is home to an abundance of larger paleagic fish; some solitary, some forming larger schools. There can be plenty of action when the current is flowing in the early morning or around dusk. There are also frequent encounters of megafauna species such as whale sharks, giant manta rays, eagle rays, blotched fantail rays and reef sharks.

Every dive at Black Rock has the potential to be an epic dive so it’s almost impossible to pick a particular highlight of the site. You will more than likely spend the whole day at Black Rock, so it is better to dive slowly and explore more parts of the dive site. Early morning and sunset dives offer potential for underwater action. For the dives during the day you can spend more time searching for the interesting small critters that make Black Rock their home or admire the spectacular soft corals in the better light around midday. Do not forget to look up into the blue for the chance of big fish encounters.

A large, central limestone rock with many smaller surrounding pinnacles. Sheer and deep on the western side. Sloping and more shallow on the eastern side.
Currents can be strong at Black Rock, especially at the northern or southern tips, with visibility usually around 25m. Either the west or east side will offer protection from strong currents.

Excellent for both macro and wide angle photography. Making a lens choice can be difficult. Either stick with your preferred lens or try two macro and two wide angle dives.

Plan your dives so you jump in a different location for each dive, perhaps at the main compass points, North, South, East and West. Explore the deeper depths at each point first and then ascend on a multi-level profile so you get to see all of the dive site at all depths. Around sunset when the current is strong, head to where the current hits the rock, there will be plenty of feeding action featuring barracuda, many species of trevally, rainbow runners, snapper and Spanish mackerel.

As you will likely be making four dives here there is ample opportunity to explore the site thoroughly. The routes can depend on which direction the current is travelling, where to spot special marine life at certain times of the day and your diving experience and air consumption. The west side of Black Rock is the deepest so it is best to explore this area on the first dive of the day where you can hit your maximum depth of 30m.

Jump in around the middle of the rock’s west face to avoid any strong currents and descend down next to the sheer wall. The wall ends around 24m where there is a rocky plateau. Heading west this plateau then tumbles down to depths around 50m. Keep your eyes peeled for activity in the early morning light.

If there is current you are likely to find more action where the strongest water movement hits the rock, which is usually at the thinner edges of the rock either at the north or south tip. You can approach fairly easily using the rock’s topography for shelter until you get close to the sweet spot. Depending on conditions you can shallow up on the sheer wall checking out all the cracks for moray eels, shrimp, cowrie shells and scorpion fish. If the current takes you round to the east side you can shallow up on the sloping side of the rock. There are plenty of hard and soft corals, sea fans and sea whips on the rock where you sometimes find ornate ghost pipefish and tiger-tail sea horses. In the shallower waters there can be huge schools of fusiliers, smaller schools of batfish and cuttlefish as you ascend for your safety stop. 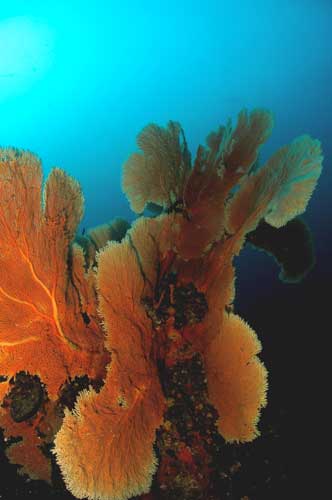 For your second dive at Black Rock you could try jumping on the opposite side of the rock, the east facing side. Descend down following the sloping side until it bottoms out at around 22m. If the current allows keep swimming east over the sandy bottom, there are some small clusters of rocks further out covered in sea fans. The bottom slowly descends beyond 30m, no need to go to deep, with good visibility you can swim in mid water and look out for rays resting in the sand, passing eagle rays and barracuda and Spanish mackerel that patrol out in the blue.

By dive three you probably have a fairly good grasp of the site’s topography and interesting areas. Black Rock is not a huge dive site, it’s possible to encircle the entire rock in one dive. So either head to parts you have found the most interesting or explore the remaining areas you might have missed on dives one an two.

Of course all the best dive plans are quickly forgotten when something big swims along. Black Rock is probably your most likely Mergui Archipelago dive site to encounter whale sharks and giant manta rays. Our record to date is 33 individual mantas logged during one days diving there. Dive briefings are likely forgotten as you hover and enjoy the show.

Dive four is likely to be shortly before sunset. This is the time of day when the dive site will be most active. Find a sheltered spot to jump and then head to the current. There is no need to go deep, most of the action will be just below the surface down to around 16m. Schools of fusiliers will be feeding on plankton swept by in the current as these schools will be harried by a variety of predatory fish. The movement of life can be mesmerising as the dispersed schools suddenly ball up closer together as danger approaches.

These are two suggested routes for dives one and two at Black Rock.

Dive one jump on the western side and explore the deeper parts of the dive site before ascending slowly in an anti-clockwise direction.

For dive two jump on the eastern side of the rock and explore the deeper area further east before ascending slowly, again in a anti-clockwise direction. 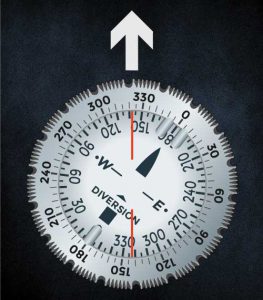 Black Rock does not lie exactly in a north-south direction. Use this bearing to head north along either side of the rock from the southern tip of the dive site.

At certain times the current may prevent you from rounding the north and south points of the dive site, if this is case simply turn around and continue to shallow up.

Black Rock sits all alone far from the Myanmar coastline. It is one of the most westerly islands in the entire Mergui Archipelago. To the north west, faint on the horizon you can see the Sular Islands and to the east Eliza Island, equally far away. Other than these small hints of land there is nothing but open ocean as far as the eye can see. It is also a deep part of the Andaman Sea. Heading West the bottom quickly reaches 300m in depth.

The remote location probably explains why Black Rock is such a lively place underwater, there is simply nothing else for many, many miles around so the rock acts as a magnet for fish life and a stopping off point for large megafauna. Even topside it is possible to witness the sea simmering with life. During surface intervals you could well see whales and dolphins and the occasional manta ray breaching the surface.

Black Rock is Myanmar’s giant manta ray hotspot. Of all the 50 or so individual identified manta rays in the Manta Matcher database from Myanmar 48 were encountered at Black Rock. Dr Andrea Marshall of the Marine Megafauna Foundation and subject of the BBC documentary ‘Andrea, Queen of Manta’ first visited Black Rock in 2011 and after only two days diving there labelled Black Rock as one of her top ten dive sites in the world. Over these two days she identified 11 individual manta rays.

Since 2011 the Marine Megafauna Foundation have returned to Black Rock on a yearly basis to further study and identify mantas at this important aggregation site. On one particular research day 33 giant manta rays were encountered over just four dives. A record breaking number and firm proof that Black Rock is an extremely important manta habitat. Satellite tagging conducted at Black Rock have revealed yet more secrets about the mysterious life of Manta Rays in the Andaman Sea and the distances they travel.

“The beauty of the archipelago will be etched into my memory forever. Black Rock now stands as one of my top 10 best dive sites of all time. We have again made manta history and the experiences that we had exploring this remote coastline will stay with me for the rest of my life.”

One of the highlights of both diving with Manta Rays and working with the Marine Megafauna Foundation is when you make a valuable contribution as a citizen scientist. This unexpectedly happened to Ric Parker after a dive with Dr Marshall at Black Rock.

“I had previously submitted a manta ID from a dive at Koh Tachai Pinnacle in Thailand, taken 12 December 2012. I remember the dive well as we were the only boat at the site and one playful manta, missing it’s right cephalic lobe had spent most of the dive with us circling around and around checking out each dive group. Then on 20 February 2013, after another memorable day at Black Rock Andrea rushed from her cabin excitedly shouting my name. She had just positively identified the very same manta at Black Rock.

The manta, now nicknamed Diamond due to a distinctive diamond shaped marking on her belly, had travelled over 260kms in just 70 days and became the first ever documented recording of an Andaman Sea manta ray crossing an international border. It was such a rewarding discovery, just from taking a photograph whilst enjoying a dive I had contributed to an important piece of manta history.” – Ric Parker

Scroll to top
We use cookies to ensure that we give you the best experience on our website. If you continue to use this site we will assume that you are happy with it.Ok