The photo above was taken in 2011. Our Similan liveaboard was moored up a few hundred metres from Koh Tachai beach. A tornado of barracuda were clearly visible from the boat so we just jumped in. That was 2011. By 2016 this area became a speedboat highway transporting over a thousand people a day. The recent closure of Koh Tachai in Thailand has resulted in an unexpected amount of international news coverage with speculation about what went wrong. Assumptions were made not only about who caused the damage, but more broadly about what the damage actually was. So who really killed Koh Tachai?

The closure has not greatly affected scuba divers and two of the deeper dive sites will remain open as usual. But at Tachai you only really need one site. The stunning Koh Tachai Pinnacle will remain open for you to dive with Whale Sharks, Manta Rays and huge schools of fish (including the barracuda). All the closure means for Similan liveaboard trips is that you are unable to visit the beach after your dive. The photo below was surprisingly taken in February 2016, a few months before the closure. Working on a diving liveaboard is a different experience as these evening beach visits have never been anything other than calm and quiet. But unfortunately day time activities were a step too far. 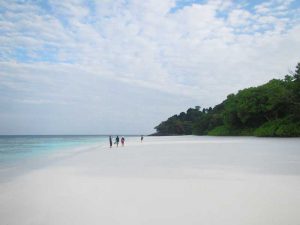 Koh Tachai beach in February 2016. Still a paradise, but only in the evenings when everyone else has gone home.

Imagine only five years and you would have found it almost impossible to get to Koh Tachai beach. Nobody went there. 5 seasons ago a liveaboard schedule included a beach visit to Koh Tachai. We did so because it was the longest stretch of beach and arguably the most beautiful around the Similan islands. It also happened to be completely deserted. There were no day trips to Koh Tachai and most liveaboard companies didn’t schedule it. Just five years ago Koh Tachai was alive.

Koh Tachai was, and still is, a designated ‘primitive zone’. That means this small and diverse ecosystem, containing several rare species, was never meant to be a crowded tourist spot. It was not expressly forbidden to visit the island, but this is probably because nobody could get there. So when the first couple of speedboat operators started to visit Koh Tachai, the national park didn’t foresee the onslaught of tourists to follow.

A few speedboats quickly turned into dozens and before long the beach was full. Bangkok Professor Ton Tamrongnawasawat claimed Koh Tachai beach could sustainably hold 70 people but “sometimes tourist numbers were well over 1000 and already crowded with food stalls and tour boats”. A lot of blame has been put on tourists, but no matter how responsible tourists are as individuals, 1000 people was just too many for such a small island. Food waste and engine diesel are inevitable byproducts.

Mr Tamrongnawasawat discussed in particular, damage to a rare blue coral that had been damaged by tourists. But, how much damage has an influx of tourism really had on the marine life at Koh Tachai? Unfortunately, what most people fail to understand is that there was another massive contributor that makes it very difficult to lay the blame on just one factor. As previously stated, mass tourism to Koh Tachai has grown over the last 4-5 years. Just prior to this, in 2010, was a huge coral bleaching event that killed huge portions of coral (particularly in shallow water). When water temperatures rise too high, algae (zooxanthellae) is expelled from the coral and it turns white. If it stays in this condition for long enough, the coral breaks up and dies.

Koh Tachai was in trouble before the day-trippers ever arrived. This does not mean that it was a bad decision to close the island. If anything, it should have been closed earlier because of its already fragile state. However, the closure should be regarded as a good thing. It is proof that not only money speaks and the national parks have proved their authority in this instance. Mr Tamrongnawasawat claimed this was a ‘turning point’ and that there is ‘new hope for sustainability in our country’.

So, Koh Tachai has been closed, but it should never really have been opened in the first place. It was supposed to be a ‘primitive zone’ but restrictions were never officially put into place. This does lead onto one final issue. If these speedboats are not travelling to Koh Tachai, where will they go? The stress is most likely going to move elsewhere. Does this mean even more speedboats going to the Similan islands or will they find the next new ‘undiscovered’ location?

One final mistake in recent reports is that Koh Tachai is one of the most beautiful islands/beaches in Thailand. It is not the most beautiful; it is one of many. There are still beautiful places in Thailand that are not yet on the tourist trail. Ask us nicely and we can tell you a few. But, it is just a matter of time before the crowds start to arrive. The question will then be if any lessons were learnt from Koh Tachai. If certain restrictions and responsible behaviour are enforced from day one, these new destinations will hopefully not face the same fate.

Anyway, don’t worry too much yet. Long live Koh Tachai! You will still see us diving at the amazing Koh Tachai pinnacle next season. You’ll just have to take your photos of an empty Koh Tachai beach from the comfort of a Similan liveaboard.